Some things are so nice, you have to try them twice; like hosting a custom engine giveaway for the race and performance enthusiast audience. That’s just what RacingJunk.com, the world’s #1 online race and performance marketplace, award-winning custom race engine maker Borowski Race Engines, and COMP Cams, one of the world’s top manufacturer of aftermarket engine parts are doing with the announcement of another chance for entrants to win a custom 700 HP, 408 cubic inch, naturally-aspirated Borowski LS Street Engine featuring top end parts and EFI system from COMP Cams and their sister companies RHS and FAST.

Launching October 24, 2022, the engine giveaway contest once again celebrates the race community as embodied by this high power, high performance engine. As the flagship site for the Internet Brands Auto Classifieds division, RacingJunk helps racers and enthusiasts buy, sell, and trade their vehicles, trailers, engines and parts to fulfill their race and performance dreams. A Borowski race engine is often the focal point of those dreams, and the addition of the COMP Cams parts turns fantasy into reality.

That’s certainly true for Randall Sipes, the recipient of the original giveaway, which launched last November at the 2021 SEMA Show. He is now installing his customized Sweepstakes engine into his 2007 Trailblazer which already had a ProCharger. The team at Borowski Race Engines modified his build for boost and E85 with higher flow fuel injectors and some other tweaks. Randall went with the optional FAST LSXRH intake manifold to match up with his existing serpentine system.
“This engine has become a best seller since we launched it two years ago,” explains Borowski Race Engines President Joe McCaul. “Our CNC machining, parts selection, expert assembly, and dyno tuning allow us to obtain power and performance using a stock block that is normally only achievable by OEs by using power adders. Plus, it looks great. We really need to give a shout-out to COMP Cams as this engine is loaded with their COMP, RHS and FAST branded products.”

The engine is a 700 HP LS Street Engine valued at approximately $17,495. It features a FAST XFI Sportsman EFI Engine Control System, a custom COMP Cam & BSR Shaft Rockers, FAST LSXR Intake & 102MM Throttle Body, FAST XR-1A High-Output Ignition Coils, and RHS LS3 Cylinder Heads that were ported on Borowski’s 5-axis CNC.
“We are pleased to be partnering with Racing Junk and Borowski Race Engines again this year for another exciting engine giveaway. The Edelbrock Group (parent company of COMP Cams) is always looking for creative ways to show off our products and they do a tremendous job educating the public on why our brands are necessary if you want to go fast reliably. Additionally, we enjoy hearing the stories of the winners and the car they put them in,” says Steve Braun, Head of Brand and Digital Marketing for the Edelbrock Group.

“Renewing this collaboration is great for everyone involved,” says Scott Stetz, Director of Sales and Business Development for the Internet Brands Auto Classifieds sites. “The engine and its components are a dream for power and performance enthusiasts, and represent the best of the industry. It’s a true customization of a truly extraordinary power plant, and as a huge supporter of grassroots racers and fans, it’s a gift to us to put them together with this opportunity.”

The giveaway will launch on October 24, 2022 and run through November 30, 2023, with the engine on display at the SEMA 2022 show in the RacingJunk booth (#24515) as well as at the Performance Racing Industry show in Indianapolis, IN in December. 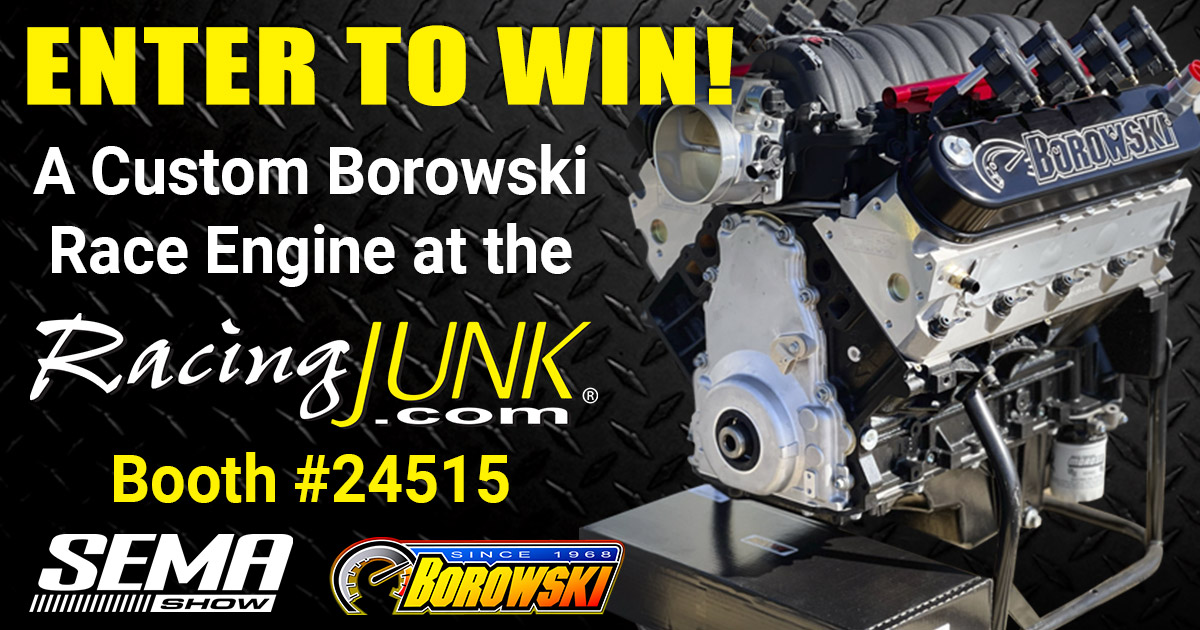